Watch: Protestors Show Up In DROVES Across The Country To EXPOSE This... 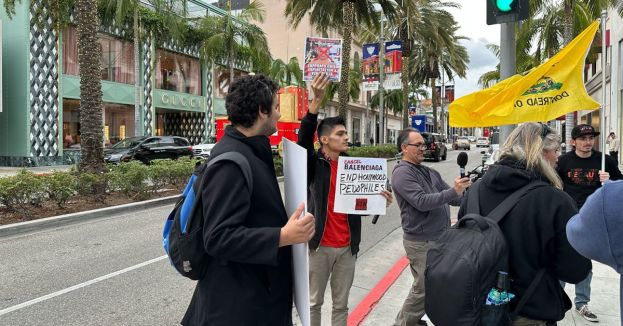 Demonstrators are not joking around with this one.

They are showing up in massive numbers to protest Balenciaga boutiques and retailers. Many of those engaged in the protests showed up on Saturday to make their voices heard about the company and its practices.

The Daily Wire reports that protestors were specifically upset by a recent marketing campaign run by the company in which toddlers were shown with teddy bears that wore BDSM-themed attire.

The protests occurred across 20 cities, including London, New York, Beverly Hills, and Nashville.

Mom Army, in association with groups such as Dad Army, Freedom Forever, and Gays Against Groomers, planned demonstrations outside of these stories throughout the world.

Lucy Riles, who volunteers her time with Mom Army, said the following:

“We are mothers, we are consumers, and we are taking a stand: stop putting profit over our children,”

She continued by saying she is:

“fed up with the sexualization, exploitation, indoctrination, child mutilation, and all these agendas that are happening right now in this country and the climate.”

The brand is a French fashion icon that celebrities such as Kim Kardashian often wear. It is under a lot of pressure after its website featured marketing materials that featured very young children posing with teddy bears wearing sexual outfits.

Another image in the marketing campaign featured a 2008 Supreme Court decision prohibiting the “pandering” of child pornography. This upheld a federal law that stiffened penalties for those who distribute or produce child pornographic material.

IS IT TROUBLING THAT US INVESTORS ARE SPENDING BILLIONS ON CHINAS AI?

Balenciaga recognized the scandal that it is in the midst of on Monday. The company said that it could have done things differently. The creative director for the company wrote the following on Instagram:

“It was inappropriate to have kids promote objects that had nothing to do with them,”

Regardless, the public outrage against the company continues to spill over. Many people are upset at the tone-deaf nature of the marketing that the company did, and they are made that the company has seemingly only offered half apologies up to this point for the role that it played in this scandal.

A protestor named Christy, who runs Trans for Trump, stated:

“My community is not in unison with the message that’s being sent out here,”

She is in full support of the protests against the company.

According to the Daily Wire, multiple cars that drove past the protests honked their horns in support.