Another Lawsuit: Uvalde Victims Sue For MORE In This Class Action Suit (Video) 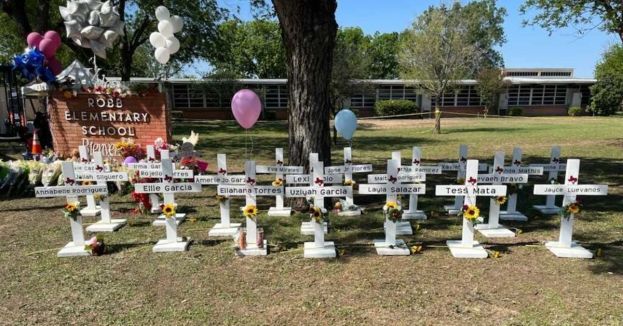 The horror of the Uvalde, Texas, school shooting was made worse by the fact that law enforcement officers failed to move for 77 minutes while a crazed gunman murdered young children just on the other side of a classroom door.

The shooting shocked the world. The nonaction of the law enforcement officers who waited while it happened disgusted the world.

Now Channel 12, a local NBC affiliate, reports that the victims and their relatives want satisfaction.

"Victims of the Uvalde school shooting that left 21 people dead have filed a lawsuit against local and state police, the city, and other school and law enforcement officials seeking $27 billion due to delays in confronting the attacker, court documents show.

"The lawsuit, which was filed in federal court in Austin on Tuesday, says officials failed to follow active shooter protocol when they waited more than an hour to confront the attacker inside a fourth-grade classroom.

"It seeks class action status and damages for survivors of the May 24 shooting who have sustained 'emotional or psychological damages as a result of the defendants' conduct and omissions on that date.'"

The nonaction of the law enforcement officers on the scene is shocking because they failed to follow the proper procedure for an active shooter situation, according to the lawsuit. Had they followed proper procedure and gone into the classroom sooner, some of the 21 victims might still be alive. So far, none of the defendants in the lawsuit have responded to media queries.

In the meantime, a group of survivors have sued David Defense, the company that manufactured the gun used in the shooting, and the store that sold the shooter the weapon. They are seeking $6 billion in damages.

"Daniel Defense, based in Black Creek, Georgia, did not respond to a request for comment. In a congressional hearing over the summer, CEO Marty Daniels called the Uvalde shooting and others like it 'deeply disturbing' but separated the weapons themselves from the violence, saying America's mass shootings are local problems to be solved locally." His position is that a gun manufacturer cannot be held liable for a crime committed using said weapon.

In the meantime, two of the officers involved in the shooting have been fired, while others have been placed on leave or forced to resign. "In October, Col. Steve McCraw, the head of the Texas Department of Public Safety, acknowledged mistakes by officers when confronted for the first time by families of the Uvalde victims over false and shifting accounts from law enforcement and lack of transparency in the available information. But McCraw defended his agency, saying they 'did not fail' Uvalde."