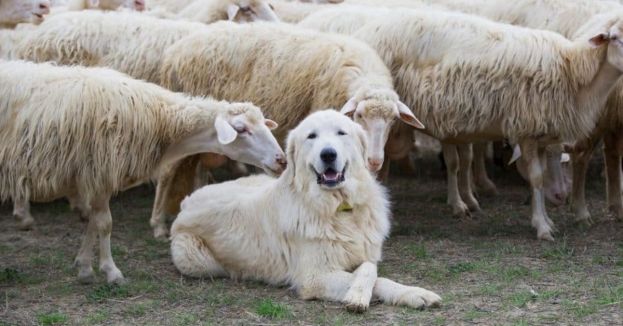 A Great Pyrenees dog named Casper earned its keep when it took on a pack of 11 coyotes in Georgia last month.

Wierwille, the owner of Casper, scared off the coyotes on November 2, 2022, but he heard the dogs barking early the next morning. They were doing combat with the returning pack of coyotes. Those coyotes attempted to kill sheep on the property, but Casper had none of it.

A few coyotes ran into the pin where the sheep were, but Casper knew how to handle this. He ran directly at the pack and killed several of them in the process.

Other coyotes jumped the fence and ran away. It didn't matter to Casper. He chased after them and killed many more of them. The dog killed eight coyotes and protected the sheep. However, Wierwille was worried about the dog after he could not be easily found.

Breitbart reports that the owner said the following about the incident:

"If he wasn't killed, we figured he was hurt. We knew he was hurt, because we found parts of his tail and blood and other things, so we were worried about him,"

It took Casper a few days to return home, but he did. The owner said the following about being reunited with his dog:

"He came back home and he just kind of looked at me like, 'Boss, stop looking at how bad I look. Just take care of me.'"

The owner got in touch with the nonprofit organization LifeLine in Atlanta. They helped perform numerous surgeries on the dog to help him recover from his injuries. His tail even had to be amputated after the attack.

On LifeLine's website, they say the following about the mission that they do:

"nonprofit with a mission of ending the shelter euthanasia of healthy and treatable animals."

It is something that allowed a great dog like Casper to continue to live his best life.